(CNN) — Take a pair of hi-fi speakers, an old radio, a couple of DVD players and countless other household appliances, apply some ingenuity and what do you get?

“Frankly, I think of it as a very large toy. I think that mindset helped me get the build done, because it’s such a daunting task,” said Haygood.

Four years in the making, it’s been as much art project as engineering feat, he says, requiring the visualization of the various body parts.

“The legs are made from outdoor speakers — they’re gorgeous. His shoulders are made from fans, his forearms from power tools. The chest and back are made from kid’s riding toys and his head is a clock radio. I also employed a 3-D printer for the hands, using a combination of the Inmoov open-source design and my own artistic expression,” the 49-year-old from Baltimore explains.

“There are so many diverse parts on the machine that it would take me all day to tell you. It was a really complex build, but I love this machine and I’m anxious to build another.” 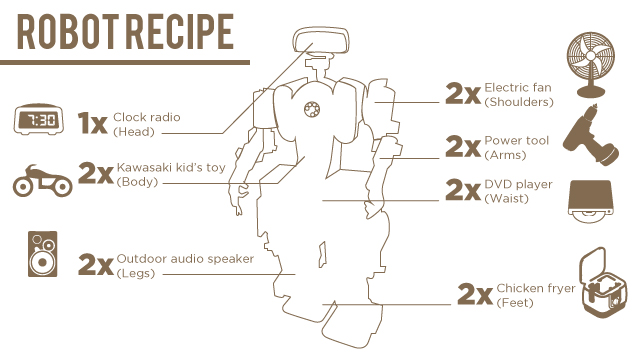 The self-taught roboticist has drawn inspiration from Honda’s ASIMOrobot and Drexel University’s HUBO as well as sounding out opinion at his local hackerspace.

Assembling HEX has cost the proverbial arm and a leg — “tens of thousands of dollars,” says Haygood — and is controlled remotely using a Zigbee USB dongle attached to his laptop.

“He can step unsupported, but it’s not completely stable — I have a slight problem with joint compliance at the moment. But his hands are fully functional, his legs are functional and he has 23 degrees of freedom.”

It’s all a far cry from Haygood’s previous life as a police officer — serving the Baltimore Police Department for over two decades before retiring in 2006.

“I really enjoyed being a cop … I wanted to go out and lock up the bad guys and that’s what I did. But policing completely takes over your life. That’s one of the reasons I got out,” he says.

The death of his father three years later prompted Haygood to re-evaluate his life and in looking for a new path he turned back to an old passion.

“I grew up very poor in Baltimore and every Christmas my mother used to purchase toy robots for me — the kind that shuffled across the floor, spun around with lights flashing. I thought they were the most marvelous things on the planet.”

This was trial by fire. I chose the most difficult thing a person could build and I’ve learned so much that my brain is just brimming now and ready to go
Mark Haygood

Not content playing with them, Haygood would pull them apart and put them back together in differing configurations.

It helped numb the pain of poverty, he says, while also keeping him out of trouble — a trick he’s hoping to pull off for a new generation of kids.

Haygood has already introduced HEX to the robotics club at Baltimore’s Dunbar High School and plans future visits to other schools and clubs in the city.

“Because of the crime problems in Baltimore, it’s a perfect opportunity to try and snatch some children back from the abyss. That’s my objective. It’s a really beautiful thing to be able to introduce robotics to kids.”

To help spread the message, and the cost, Haygood is launching a Kickstarter campaign. The money raised will be used to iron out flaws as well as document the entire process — “so anyone can see every nut, bolt and screw,” he says.

“It’s full speed ahead for me now. This was trial by fire. I chose the most difficult thing a person could build and I’ve learned so much that my brain is just brimming now and ready to go. I’m excited for the future.”