NAME: Benjamin Banneker
OCCUPATION: Astronomer, Engineer, Surveyor
BIRTH DATE: November 09, 1731
DEATH DATE: October 25, 1806
PLACE OF BIRTH: Ellicott’s Mills, Maryland
Benjamin Banneker has been called the first Great African American Scientist. As a self-taught engineer, Banneker began his scientific journey with his friend  Josef Levi’s watch. After seeing the watch only once, Banneker, only 2 months later  created a clock of wood that kept precise time for more than 40 years. With only rudimentary books available to him, Banneker also taught himself astronomy and correctly predicted the solar eclipse of April 14, 1789. From 1791 to 1802 he published the Pennsylvania, Delaware, Maryland, and Virginia Almanac and Ephemeris, which contained tide tables, future eclipses, and medicinal formulas. It is believed to be the first scientific book published by an African American. Also a surveyor and mathematician, Banneker was appointed by President George Washington to the District of Columbia Commission, which was responsible for the survey work that established the city’s original boundaries. When the chairman of the committee, Pierre Charles L’Enfant, suddenly resigned taking the plans with him, Banneker reproduced the plans from memory, saving valuable time, and hundred so thousands of invested dollars. A staunch opponent of slavery, Banneker sent a copy of his first almanac to then-Secretary of State Thomas Jefferson to counter Jefferson’s belief in the intellectual inferiority of blacks.

*Published the first scientific book written by an African American.

* From memory, Banneker reconstructed hundreds of  pages of design schematics for
Washington D.C. from when Pierre L’Enfant walked off the project. Thomas Jefferson, then secretary of state, was a slave owner and was opposed to a large scale project being credited to a “Negro”. Jefferson was very vocal about his position that blacks were mentally inferior. Banneker sent Jefferson his Almanac in reply, along with a letter  describing the hypocrisy of the Declaration of Independence that Jefferson helped shape.

“…Sir, suffer me to recal to your mind that time, in which the arms and tyranny of the British crown were exerted, with every powerful effort, in order to reduce you to a state of servitude : look back, I entreat you, on the variety of dangers to which you were exposed ; reflect on that time, in which every human aid appeared unavailable, and in which even hope and fortitude wore the aspect of inability to the conflict, and you cannot but be led to a serious and grateful sense of your miraculous and providential preservation ; you cannot but acknowledge, that the present freedom and tranquility which you enjoy you have mercifully received, and that it is the peculiar blessing of Heaven.

This, Sir, was a time when you cleary saw into the injustice of a state of slavery, and in which you had just apprehensions of the horrors of its condition. It was now that your abhorrence thereof was so excited, that you publicly held forth this true and invaluable doctrine, which is worthy to be recorded and remembered in all succeeding ages : “We hold these truths to be self-evident, that all men are created equal ; that they are endowed by their Creator with certain unalienable rights, and that among these are, life, liberty, and the pursuit of happiness.” Here was a time, in which your tender feelings for yourselves had engaged you thus to declare, you were then impressed with proper ideas of the great violation of liberty, and the free possession of those blessings, to which you were entitled by nature ; but, Sir, how pitiable is it to reflect, that although you were so fully convinced of the benevolence of the Father of Mankind, and of his equal and impartial distribution of these rights and privileges, which he hath conferred upon them, that you should at the same time counteract his mercies, in detaining by fraud and violence so numerous a part of my brethren, under groaning captivity and cruel oppression, that you should at the same time be found guilty of that most criminal act, which you professedly detested in others, with respect to yourselves.

I suppose that your knowledge of the situation of my brethren, is too extensive to need a recital here ; neither shall I presume to prescribe methods by which they may be relieved, otherwise than by recommending to you and all others, to wean yourselves from those narrow prejudices which you have imbibed with respect to them, and as Job proposed to his friends, “put your soul in their souls’ stead ;” thus shall your hearts be enlarged with kindness and benevolence towards them ; and thus shall you need neither the direction of myself or others, in what manner to proceed herein. And now, Sir, although my sympathy and affection for my brethren hath caused my enlargement thus far, I ardently hope, that your candor and generosity will plead with you in my behalf, when I make known to you, that it was not originally my design ; but having taken up my pen in order to direct to you, as a present, a copy of an Almanac, which I have calculated for the succeeding year, I was unexpectedly and unavoidably led thereto.” 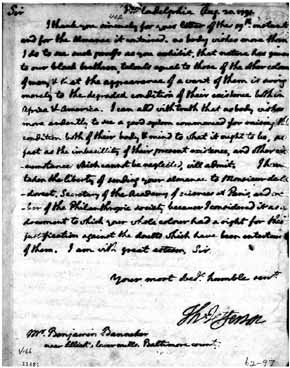 “Sir, I thank you sincerely for your letter of the 19th. instant and for the Almanac it contained. no body wishes more than I do to see such proofs as you exhibit, that nature has given to our black brethren, talents equal to those of the other colours of men, & that the appearance of a want of them is owing merely to the degraded condition of their existence both in Africa & America. I can add with truth that no body wishes more ardently to see a good system commenced for raising the condition both of their body & mind to what it ought to be, as fast as the imbecillity of their present existence, and other circumstance which cannot be neglected, will admit. I have taken the liberty of sending your almanac to Monsieur de Condorcet, Secretary of the Academy of sciences at Paris, and member of the Philanthropic society because I considered it as a document to which your whole colour had a right for their justification against the doubts which have been entertained of them. I am with great esteem, Sir, Your most obedt. humble servt.”