Home 45 Years Ago Today Dr. Martin Luther King Was Assassinated, The Entire Story Before, During, After It was 45 years ago today that civil rights leader Dr. Martin Luther King, Jr. was killed by an assassin’s bullet in Memphis. The world has changed greatly since 1968, but King’s message survives intact.

King was in Tennessee to help support a sanitation workers’ strike. At the age of 39, King was already an internationally known figure. Starting with the Montgomery boycott in 1955, King had led a series of nonviolent protests against discrimination.

When King was awarded the Nobel Peace Prize in 1964, at the time he was the youngest Peace Prize winner ever, at the age of 35.

His acceptance speech in Norway included the famous statement, “I believe that unarmed truth and unconditional love will have the final word in reality. This is why right temporarily defeated is stronger than evil triumphant.” King also donated his prize money of $54,123 to the civil rights movement.

On April 3, 1968, King had traveled to Memphis to support a movement seeking better compensation for black sanitation workers. He spoke at the Bishop Charles Mason Temple to a group of supporters–knowing there were threats made against his life.

He told the audience about how he survived a 1958 assassination attempt by a mentally deranged woman named Izola Ware Curry, who stabbed King in the chest at a New York book signing. King had read in a newspaper that if he had sneezed just before the attack, the location of the wound have been fatal.

“I want to say tonight that I, too, am happy that I didn’t sneeze. Because if I had sneezed I wouldn’t have been around here in 1960, when students all over the South started sitting-in at lunch counters. And I knew that as they were sitting in, they were really standing up for the best in the American dream and taking the whole nation back to those great wells of democracy, which were dug deep by the founding fathers in the Declaration of Independence and the Constitution,” he said.

The better-known part of King’s speech was its conclusion.

“I don’t know what will happen now; we’ve got some difficult days ahead. But it really doesn’t matter with me now, because I’ve been to the mountaintop. And I don’t mind. Like anybody, I would like to live a long life–longevity has its place. But I’m not concerned about that now. I just want to do God’s will. And He’s allowed me to go up to the mountain. And I’ve looked over and I’ve seen the Promised Land. I may not get there with you. But I want you to know tonight, that we, as a people, will get to the Promised Land. And so I’m happy tonight; I’m not worried about anything; I’m not fearing any man. Mine eyes have seen the glory of the coming of the Lord,” King concluded.

At 6:05 P.M. on Thursday, April 4, 1968, King was shot while standing on a balcony outside his second-ﬂoor room at the Lorraine Motel. One shot was heard coming from another location. King was rushed to a hospital and died an hour later.

A young colleague, Jesse Jackson, had been below King’s balcony speaking with him when the civil rights leader was shot.

Senator Robert Kennedy was at a campaign rally when he learned of King’s death.

In July 1968, a fugitive, James Earl Ray, was extradited from Great Britain to stand trial for the killing. Ray agreed to a controversial plea bargain, and was sentenced to 99 years in prison, where he died in 1998.

Ray later recanted his confession, and members of King’s family supported reopening an investigation into the shooting.

At the time of his death, King was trying to organize a protest in Washington against poverty, and he had become outspoken as an opponent of the Vietnam War.

A year earlier, King told an audience on April 4, 1967, at a New York City church that he was against the war overseas.

“We were taking the black young men who had been crippled by our society and sending them 8,000 miles away to guarantee liberties in Southeast Asia which they had not found in southwest Georgia and East Harlem,” he said.

Three years ago, Representative John Lewis, who was a civil rights protester in the 1960s, spoke with CNN on the anniversary of King’s death.

“He told us how to stand up and how to fight. I remember him saying on one occasion, soul–from the depth of his soul that you could stand up and not bend your back. When you stand up straight, no man, no person can ride on your back.” 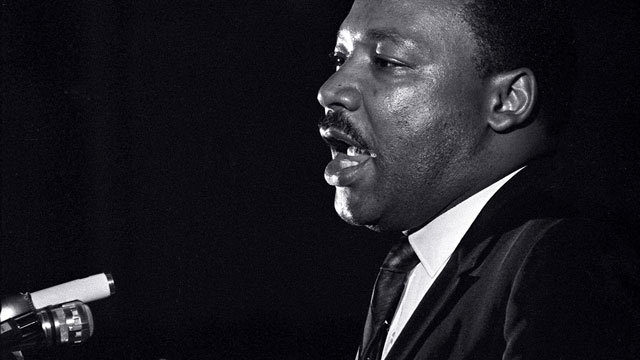 Dr. Martin Luther King Jr. makes his last public appearance at the Mason Temple in Memphis, Tenn., on April 3, 1968.  The following day, King was assassinated on his motel balcony. 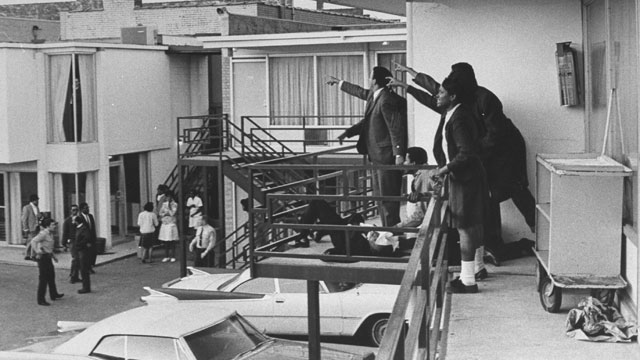 The Fatal Shot, Civil rights leader Andrew Young, left, and others on the balcony of the Lorraine Motel point in the direction where gunshots came from after the assassination of civil rights leader Martin Luther King Jr. on April 4, 1968. His body lays at their feet. 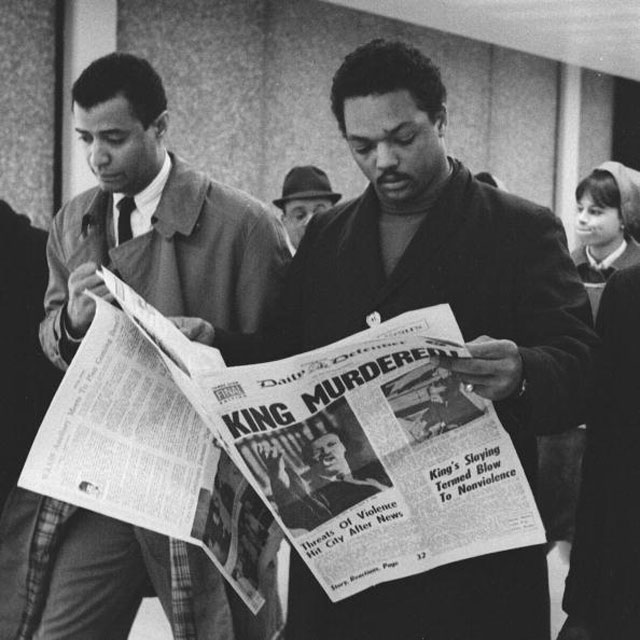 As he walks through O’Hare Airport in Chicago, American civil rights leader the Rev. Jesse Jackson holds a copy of the Daily Defender newspaper, which features the headline ‘King Murdered!’ April 5, 1968. The headline refers to the assassination of Martin Luther King Jr. on the evening of April 4, 1968. 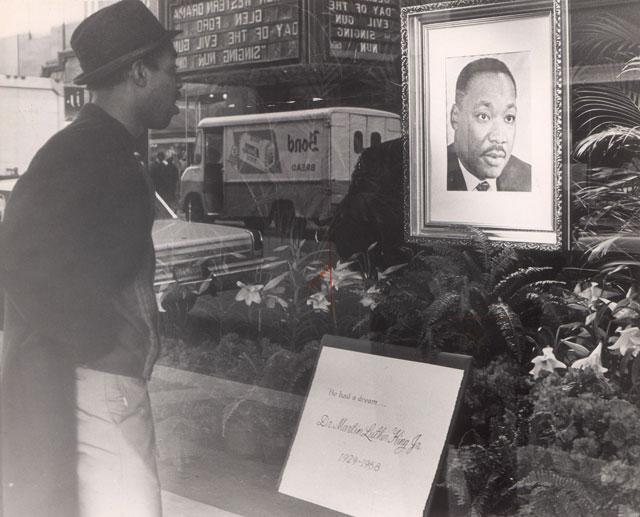 A man looks at the portrait of Martin Luther King Jr. in the window of Jordan Marsh, a department store in Downtown Crossing in Boston, on April 6, 1968. 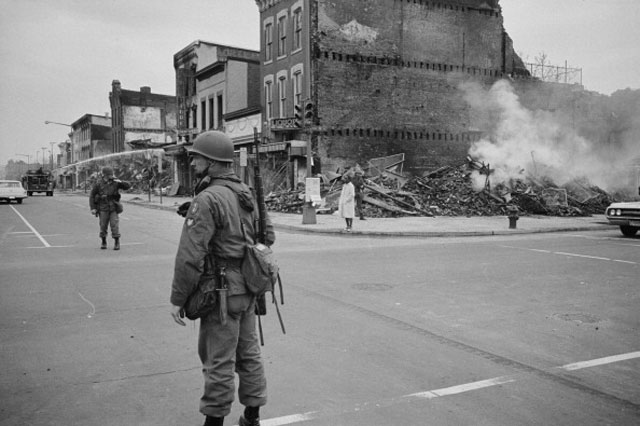 A soldier stands guard on April 8, 1968 on a Washington, D.C., street amid the ruins of buildings that were destroyed during the riots that followed the assassination of Martin Luther King Jr. 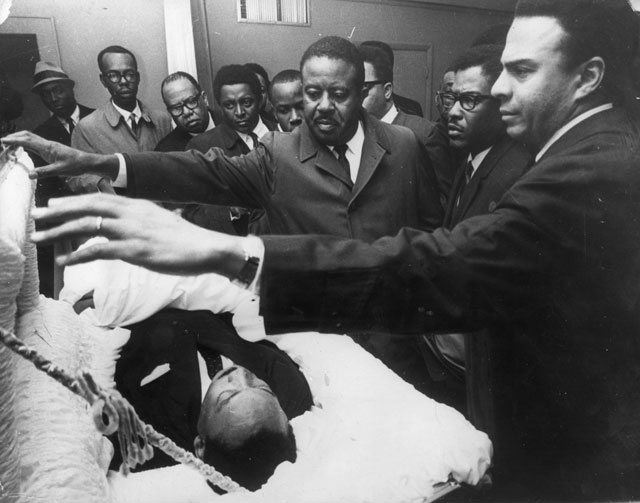 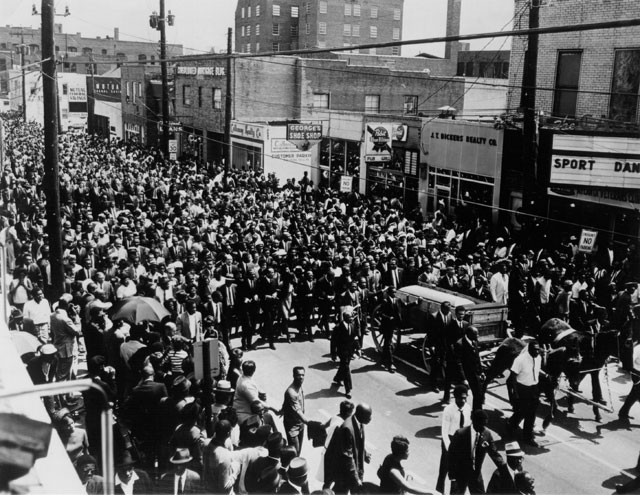 The funeral procession  for civil rights leader Martin Luther King, Jr. on April 9, 1968 in Atlanta draws thousands of mourners who came to pay their last respects to King at a public service at Morehouse College. A private funeral was held separately at Ebenezer Baptist Church. 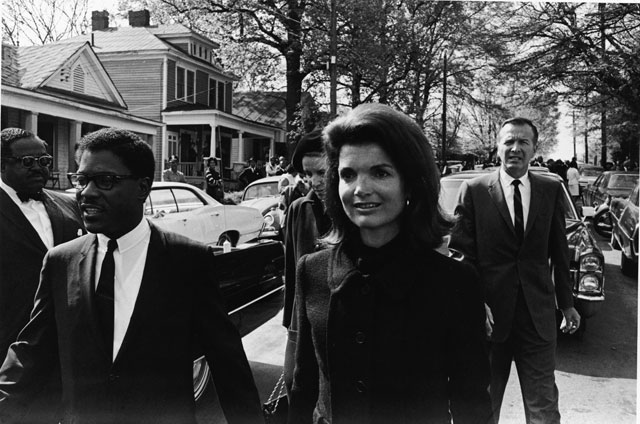 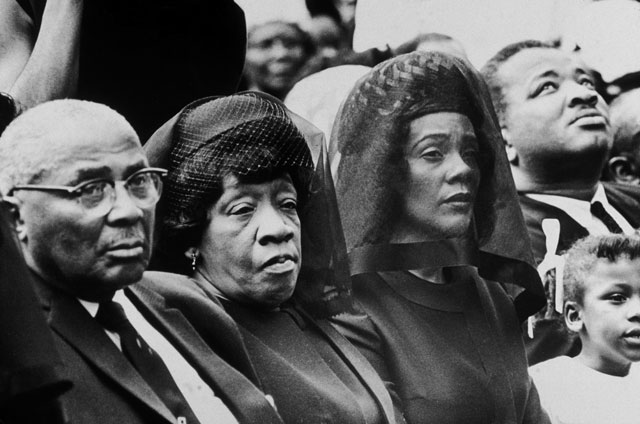 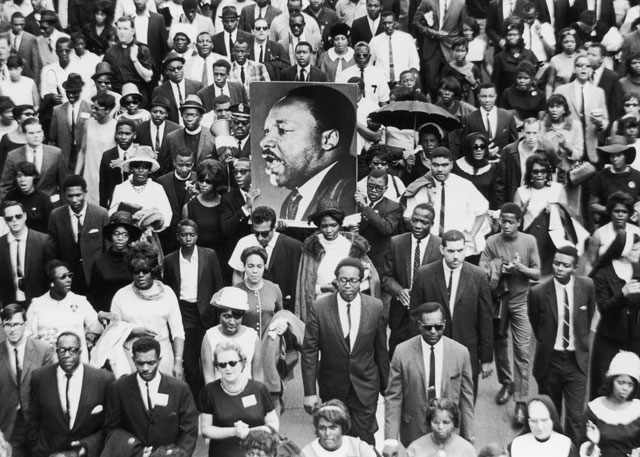 A large crowd of mourners follow the casket of Martin Luther King Jr. through the streets of Atlanta.

45 Years Ago Today Dr. Martin Luther King Was Assassinated, The Entire Story Before, During, After was last modified: April 15th, 2013 by Stephen Brown
18.9k
SHARES
ShareTweetSubscribe